If you loved Thaddeus Beckett in I Dream of You and More to Love, you’re going to adore his little brother, Benjamin Beckett in my latest release, Lawfully Innocent: A US Marshal Lawkeeper Romance, available for purchase HERE on Amazon at the low introductory price of 99 cents! The book is also on Kindle Unlimited and will be released in paperback very soon.

Benjamin Beckett, a handsome young English lord, lacks purpose in his life of privilege. After learning the truth about his heritage, he decides to leave unbearable boredom behind, making drastic changes in his too predictable life.

Adventure awaits Benjamin across the ocean, and he embraces the challenges before him.

Can a man who’s not yet thirty be strong enough to impact the New World?

Will he find a cure for his loneliness and ennui?

Lawfully Innocent is one of a series of books by The Lawkeepers, a group of Christian authors who write about romance in various time settings and law enforcement occupations. You can find those books on Amazon HERE.

The books are novellas – quick reads of three or four hours – perfect for reading on the beach on Labor Day! 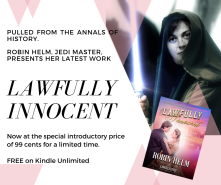 edit biographydelete Biography A Very Austen Valentine is now on a blog tour! Giveaways, excerpts, guests posts, author interviews, and vignettes are featured on the tour through January 21. Robin Helm's time revolves around music as she plays and teaches. Her books reflect that love, as well as her fascination with the paranormal and science fiction. Her latest publication is Understanding Elizabeth, in which Darcy must decide how much he’s willing to pay to have what he wants. Previously published works include The Guardian Trilogy (Darcy is Elizabeth’s guardian angel) and the Yours by Design series (Fitzwilliam Darcy switches places in time with his descendant, Will Darcy). Mrs. Helm is also featured in a series of anthologies with several other like-minded authors. A Very Austen Christmas has been a Best Seller on Amazon in several categories. A Very Austen Valentine was released on December 29, 2018. A Very Austen Romance is being planned for December 2019. She lives in South Carolina and adores her husband, two married daughters, three grandchildren, and four family dogs. AWARDS: The Guardian Trilogy Austenesque Reviews 2013 P & P Variation/Alternate Path Award Yours by Design series Austenesque Reviews, Top Ten Time Travel novels Of Pens and Pages, Top 5 Modern Pride & Prejudice Retellings A Very Austen Christmas: Austen Anthologies, Book 1 More Agreeably Engaged, Favorite Books of 2017 A Very Austen Valentine: Austen Anthologies, Book 2 More Agreeably Engaged, Favorite Anthology, 2018 View all posts by Robin Helm